We used to use the commercial SparkPost ESP (email service provider) to send and receive emails for karrot.world. Recently, SparkPost decided to cut down their free account from 100.000 to 500 emails/month - not enough for us.

Handling emails seems an important but sensitive topic. I used to encounter statements like “do not run your own mail server” and so far, I was quite happy to follow this advice. But by now, seeing that email sending gets more and more “oligopolized” (like a monopol, but with a few big players) and free offers are getting more and more restricted, I became interested in handling this vital part of web applications myself.

My research led me to Postal, a “fully featured open source mail delivery platform”. Although its recent contributions are fairly low and issue count is high, it left a good enough impression to give it a try.

Luckily, there’s also a third-party docker-compose setup available that simplifies running all the necessary things - Ruby-on-Rails, MySQL and RabbitMQ. I chose the alpine version mostly because it was marked as default in the README file, but also because I generally like alpine linux.

Now I edited the dns section in src/templates/postal.exammple.yml:

I added the helo_domain setting to match the Reverse DNS lookup for postal.karrot.world. A simple way to find out the correct domain:

The wiki page on DNS configuration gave me all information I needed:

I entered this information in our Namecheap Advanced DNS panel. More DNS entries will follow later, when adding a new sending domain in the Postal web interface.

By default, the SMTP server only listens on localhost. I changed that in docker-compose.yml to listen on all devices:

I also allowed incoming SMTP connections in the ufw firewall:

On this server, there was already a postfix daemon running for internal emails. I disabled its SMTP part by commenting out this line in /etc/postfix/master.cf:

Now I can use the commands given in the docker-postal README to configure and start the containers:

First, we have to create a new organization. It’s just a name, choose any! 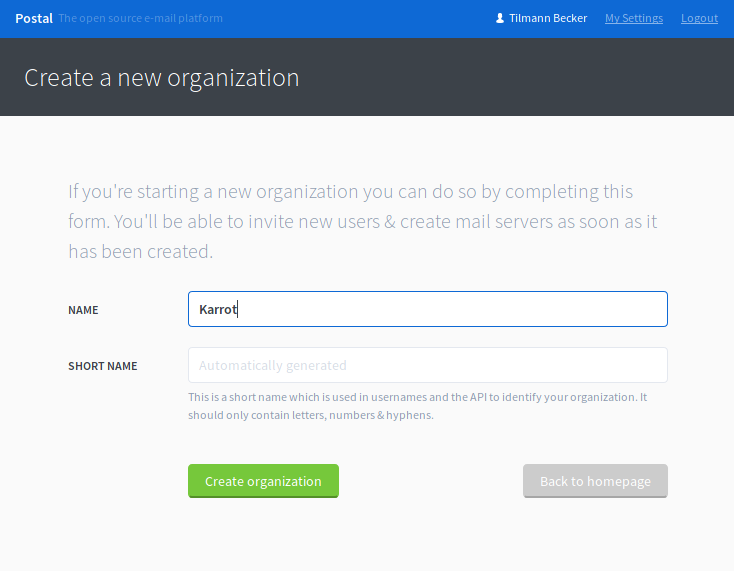 Then, we should create a mail server. It’s also just a name, but make sure to create one mail server per app instance. Postal handles all messages and tracking information per mail server. 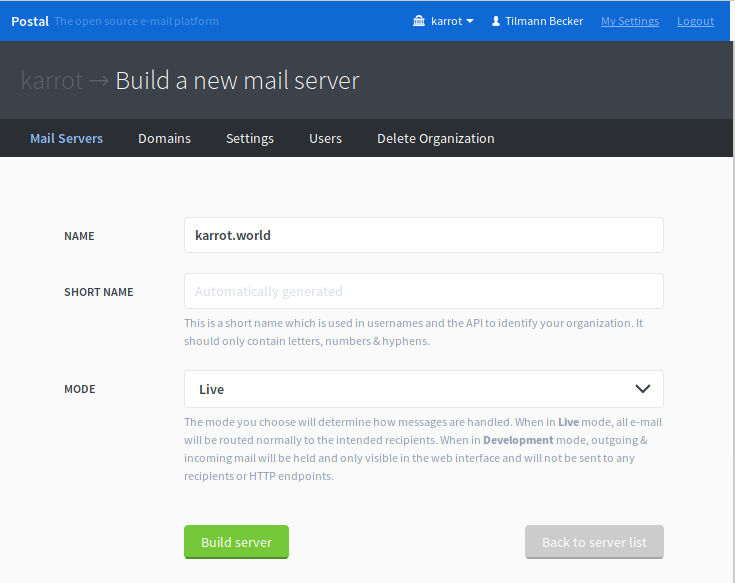 Once you have a mail server, create one or more sending domains. This is also necessary to receive emails (more on that later). 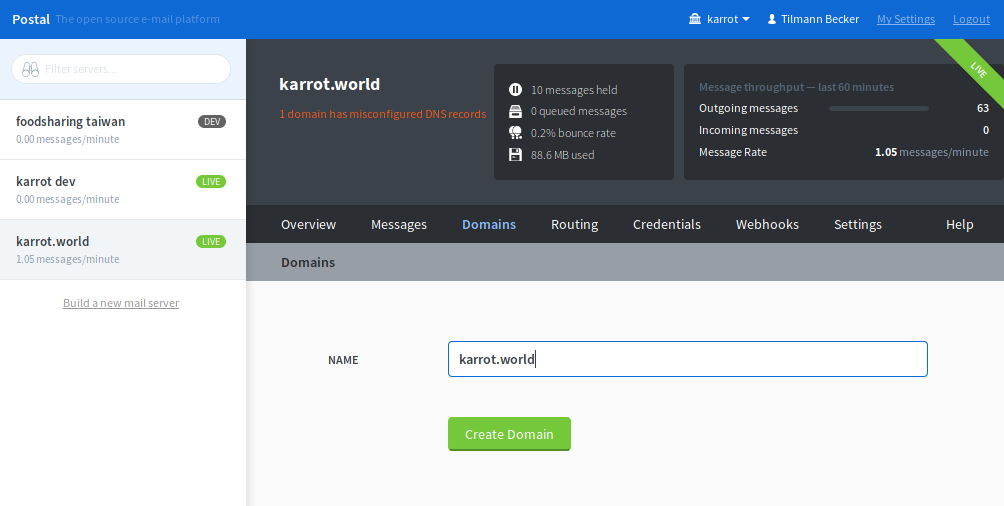 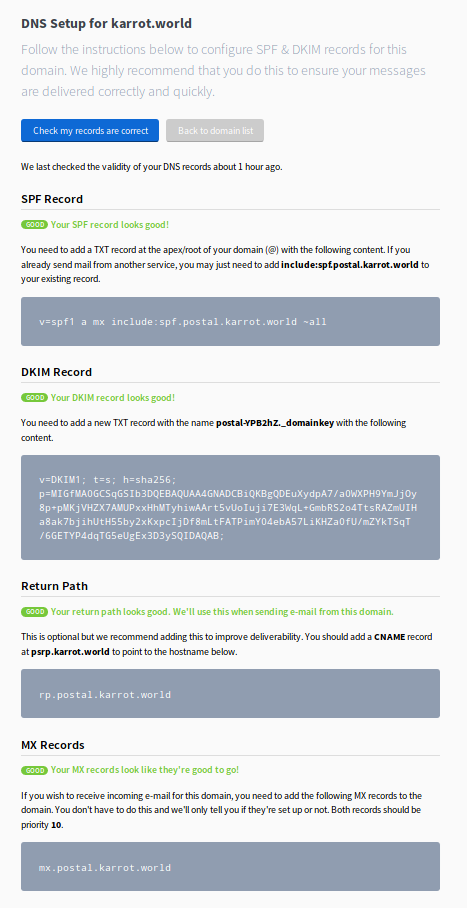 Now you can create a webhook that receives tracking information about sent or bounced emails. 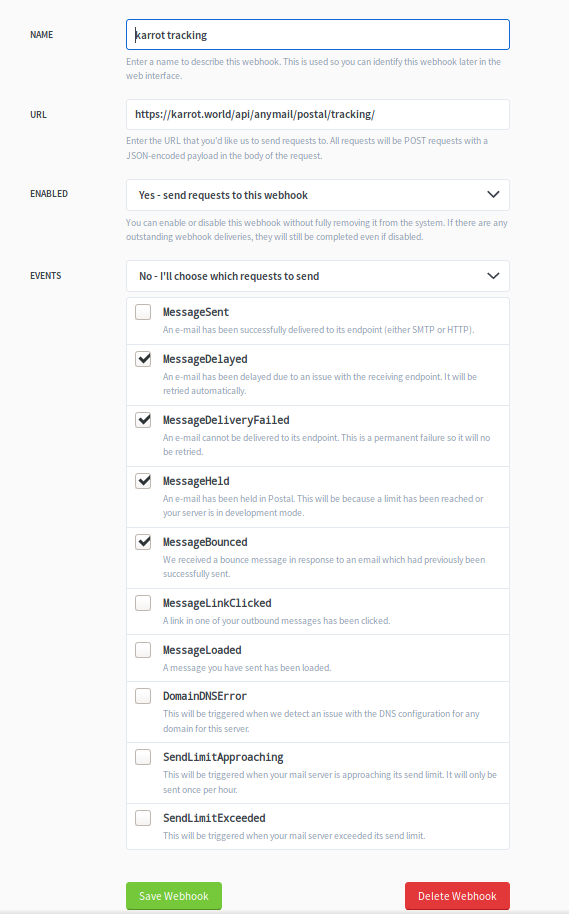 Finally, let’s create the API key that we use in our application to send emails. 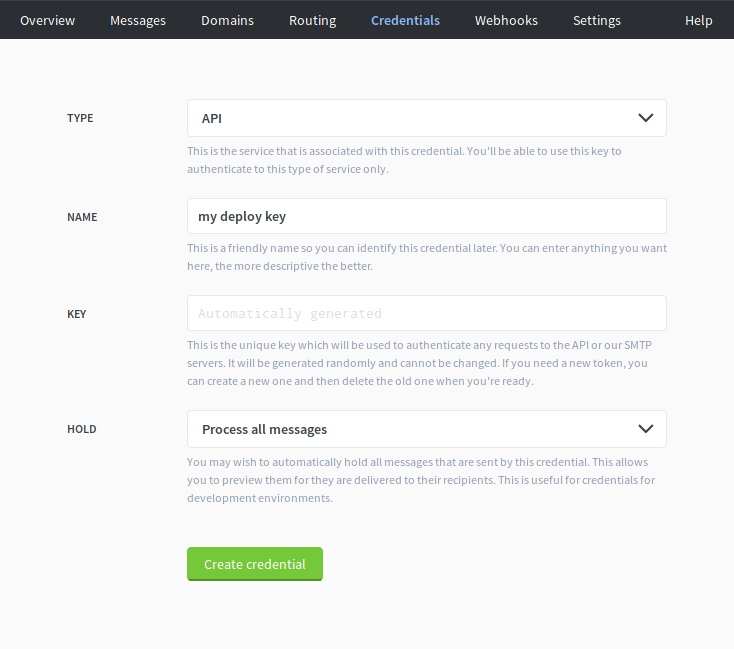 For receiving emails, make sure to create an inbound route and inbound webhook. We use a subdomain for receiving replies, therefore I created a second domain replies.karrot.world. 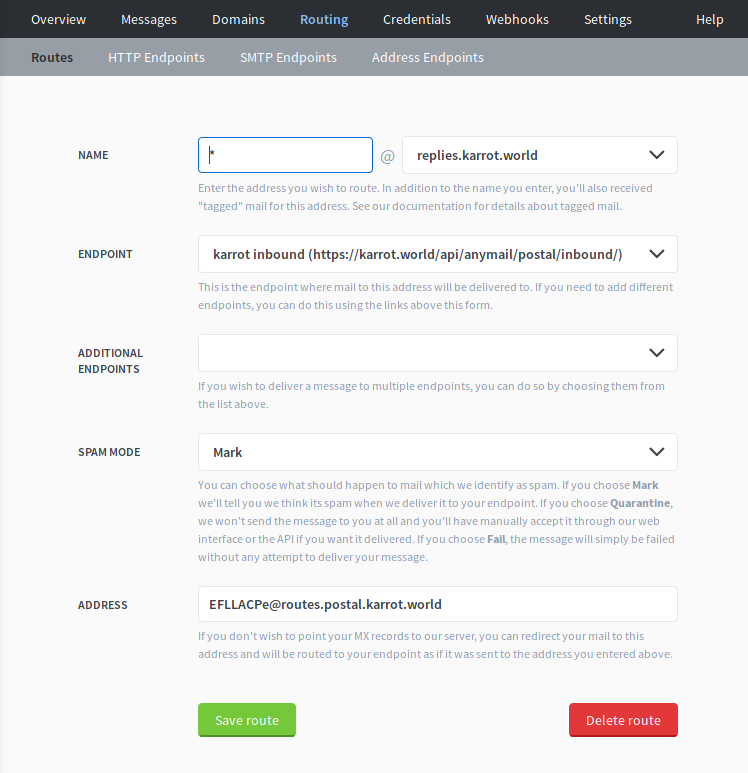 I use django-anymail to talk with Postal, and it expects the raw message as JSON format. We can define these settings in the HTTP endpoint: 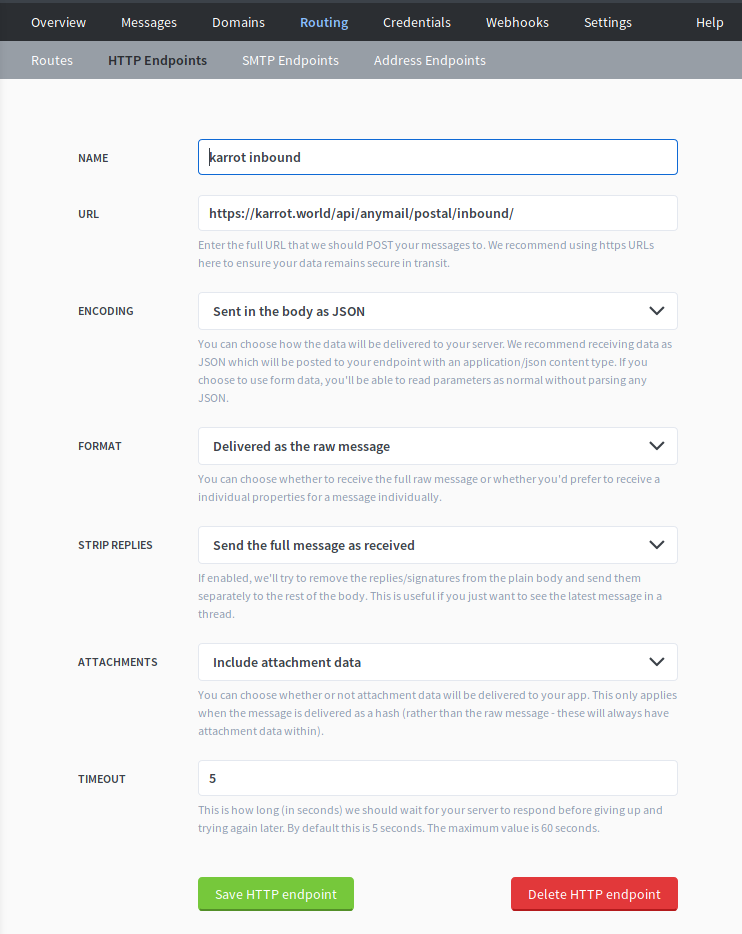 MySQL has a known problem that the default UTF8 charset doesn’t support 4-byte codepoints. Some emojis fall into this range, which is how I noticed the problem. Other people already proposed a fix for this, but unfortunately it didn’t get merged so far. I took a shortcut and just fixed in manually in the database.

You need to do this for every Mail Server you configured in Postal.

Of course this should be fixed in Postal.

django-anymail is a great library to talk with various ESPs. Unfortunately, Postal is not supported yet. I started working on a implementation, which works for karrot.world, but needs to be improved before it can be merged.

POSTAL_WEBHOOK_KEY is used to verify webhook message signature. Postal signs webhook messages with the same private key as DKIM, hence we can use the DKIM public key for verification.

I thought I would be able to upgrade Postal by running docker-compose run postal auto-upgrade, but it fails for various reasons. In fact, the docker-postal README discourages from doing that.

Instead, we should pull a new version of the container (they get frequently updated) and run docker-compose run postal upgrade afterwards to execute any pending database migrations. I didn’t try that yet.

While setting up Postal, I noticed some things that made me a bit concerned about its quality:

I found mail-tester.com useful to check if SPF and DKIM settings are valid. We can use it 3 times, then they want payment. Luckily, we can also use other websites to check if we are on any IP blacklist, for example mxtoolbox.com.

Not everybody likes my emails…

In the first days after rolling out the new configuration, I kept a close eye on outgoing emails. I noticed these things:

Other than that, delivering emails work just fine!

It was a bumpy ride to get it set up, but I’m quite happy with our new independence. There’s still a lot to do: finalize the anymail Pull Request, fix the UTF8MB4 bug, extend our ansible config. My hope is other projects can easily use Postal instead of relying on commercial ESPs.

As far as I know, there’s no comparable open source project out there.

I looked at ZoneMTA, Haraka and mailcow, but they all have different scopes. ZoneMTA is the only one of them that offers a HTTP API for sending emails, but it doesn’t support receiving them.

I just noticed that STARTTLS is not enabled by default - no wonder, it doesn’t have a certificate. To enable it, add those lines to postal.yml (inside container):

I wanted to use the certificates from the reverse HTTP proxy, which runs on the host system. To have the certificate files accessible in docker, I added a read-only bind mount to docker-compose.yml: